Author Gord Hunter will be at the Yorkton Public Library next Wednesday promoting his book No-Badge Killick.

The book tells the story of Gord Hunter’s journey from a young naive recruit to, eight years later, a seasoned leading seaman, a submariner in Canada’s Cold War navy.

Hunter, who was born in Grand-Mère, Quebec, lived in six different provinces, and spent almost 20 years in Regina, has a background in writing, although No-Badge is his first novel.


“I studied Communications Arts at what is now Mount Royal University in Calgary focusing on Broadcasting and journalism,” he told Yorkton This Week. “I published two limited run cookbooks and numerous articles for internal union communications.”

But, where did the idea for the book come from?

“It struck me at some point when sitting around swapping yarns with friends that my stories were unique,” said Hunter, who joined the navy at age 17. “No one else in my circle of friends had dealt with storms in the North Atlantic, tracked Soviet submarines and spy ships, served in the submarine service or sailed to South America and watched the Southern Cross climb higher into the night sky as the Big Dipper sunk into the Northern horizon.

“As well, I thought it would be a good thing if my children could get a sense of what their father did as a young man.

“No-Badge Killick started as an exercise in writing and the stories in it first saw the light of day as a blog.

“Eventually it occurred to me that, if the content in the blog was reorganized, expanded and rewritten, it could be a book.

“I took the stories down from the blog and started rewriting.”

Hunter’s time in the navy was an interesting one, as he served in the Royal Canadian Navy during the Cold War from 1962 until 1970.

The timing of his career helped him decide to go forward with the book.

“Very few people today even know about the Cold War and for those who do it is a distant memory,” said Hunter. “The people who served during the Cold War are getting older. I have lost many old friends in recent years. I felt the stories were too important to be lost because no one had taken the time to write them down.

“There hasn’t been very much written about the Cold War Navy. Most of what I have found are academic studies - almost all unreadable examinations of the Navy by and about former senior members of the Naval hierarchy.

“It is an important period in Canada’s history mostly ignored by our government.”

So, was it easy to get the stories on paper?

“In the beginning, a lot of the stories came to me without any great effort, but it helped that a couple of old friends live in Alberta, one I served with on surface ships and the other a former submariner who was a watch mate,” said Hunter. “Sitting with them and sharing our mutual experiences helped me recall a great deal.

“I had to do quite a bit of research though to fill in blanks and to find dates. I had to refresh my knowledge of some of the sonar systems I had worked on and to recall some of the more technical aspects of the submarines.

“At some point I gave a draft of the book to a group of friends, writers, and very diverse readers, asking for their thoughts. Their feedback helped me shape the later rewrites.

“I can’t tell you how many times I rewrote chapter after chapter. It took me about seven years altogether.”

The stories are of course Hunter’s life and he admitted that sharing some of it was a challenge.

“For the most part it wasn’t difficult getting the stories down, but I did struggle with having to bare my soul about some of the events that took place during those years,” he said. “It took me several rewrites to get the personal level right.”

While sharing the personal side of the story was hard, it was not the only challenge in writing the book.

“One of the biggest challenges in writing No-Badge Killick was crafting the descriptions of life at sea and in describing some of the more technical aspects of the stories,” said Hunter. “The book had to be approachable for anyone who had never been to sea and who had no understanding how, for example, a submarine’s snorkeling system works. At the same time, it had to be detailed enough to hold the interest of those who had been to sea and who had perhaps worked with that equipment or with some of the complex weapons systems described in the book.”

But the story of living on the water also came through as a book strength, said Hunter.

“Life in the Navy during the 1960’s was a tough life in many ways,” he said. “The post war Navy was steeped in tradition and was stiflingly hierarchical but the camaraderie among the sailors in the lower decks would be hard to replicate. Despite it all, we had a lot of fun.

“I think the book captures much of what is was like for a young sailor during that time.”

In the end, Hunter is satisfied with the story he has told.

“I have a good story; the book looks good, it feels good in your hand and I now have my own publishing company,” he said.

“More than that though the story continues; many readers who served in the navy the same time I did have been posting their experiences on-line through photos and their own stories some of which I have been sharing on my blog.

“I think every author looks back at what they have written and thinks, ‘I should have included that, or I wish I had expanded that section a bit more.’ But I am, all in all, very happy with the book and the decisions I made which brought [it] to fruition.”

As for an audience, Hunter said it will appeal to those with an interest in Canadian history.

You can learn more about the book at https://nobadgekillick.blogspot.com/ or attend the library event at 7 p.m. Wednesday, Sept. 26.

To order your own personal copy of No-Badge Killick, send an e-mail to me at  gfh@sasktel.net   indicating how many copies of th... 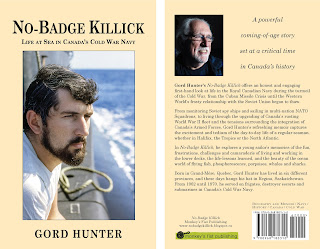